It is so frustrating when you mess up a trap opportunity the first time around, in this case, I firmly blame my cat Snickers; here she is this time messing up my painting, luckily the tray was empty of paint!

We had recently moved to a compound and a stunning ginger cat had been coming into our garden and spraying the walls to mark his territory, as tom cats are prone to do. I decided it was time to trap him and sort this situation out.

The scene is set, the trap is in place and I am patiently inside watching from the window just above the trap but out of sight. Ginger, enticed by the smell of tuna is edging into the trap and almost on the plate (they step on the plate and it triggers the door to shut), when Snickers unseen by me, comes into the room obviously wonders what I am looking at and tries to launch herself up to the very small window ledge, misses it but manages to bash the window in the process. At which point Ginger startled by the noise, springs backwards out of the trap, hitting it on the way out which makes the door snap shut in his face terrifying the life out him. He then flys at breakneck speed up the nearest tree and is gone.

As experienced trappers know, once such an incident happens a cat can become completely trap shy, getting them near a trap again is very hard. So I went through the process of cable tieing the trapdoor open and feeding Ginger near the trap, aiming to get him used to it. Clever Ginger would eat in front of the trap, beside the trap and behind the trap but he would not put one paw inside that trap, not even for the tastest offerings. This went on for weeks and then one morning he arrived in the garden with a swollen face and completely closed up eye – toms (unneutered males) fight over territory, food and females, Ginger was no different but this time he had come off worse! Now I really needed to somehow catch him.

As the trap was out of the question, husband and I thought we would net him but Ginger wasn’t having that either. As soon as we tried to go into the garden when he was there, he was gone, we couldn’t get anywhere near him, we needed another plan. In the meantime, I put antibiotics in his food and the swelling went down on his face but still, the eye was closed and weeping.

Desperation was starting to set in when a fellow TNR volunteer mentioned she had a drop trap, I had used these in the Philippines and thought this could be the solution to the problem. So we set it all up and of course Ginger wouldn’t go under it! He sat on the garden table and scorned us whilst we sat holding the end of the string waiting to pull.

Finally though (after many a boring moment sat holding the string and waiting) he was getting really hungry and was tempted under the trap. This was it, if we messed up now we would never get him! At this point, I gave the string to my husband whose nerves weren’t quite as frayed as mine, a quick tug the trap dropped and we finally had him!

So that is the very long story of the Ginger trapping challenge, though it didn’t quite end there as just to add to the bad timing we were going on holiday the next day, at the visit to the vet we got the diagnosis that part of the actual eye itself was cut, was very painful and needed drops put in it for about 10 days – yes drops in an eye of a cat who just wanted to attack and get free! Well the vet took on the job of doing this (with thick gloves I bet) and we paid for Ginger to board whilst we were on holiday; just don’t ask what the total bill was with all the treatment and boarding, am sure Ginger will show his appreciation one day…

Anyway, it all ended well. His eye is healed, he is neutered so no longer marks the walls, doesn’t go off fighting or searching for girls, actually most of the time he can be found snoozing on the garden chair cushion. I am even allowed in the garden with him, as long as I keep my distance. I think the garden now belongs to Mr Ginger who we now call Teddy, though this is one Teddy bear who definitely does not want a cuddle, we are friends from a distance which is fine by me.

By Denise Wood (a TNR volunteer)

One thought on “The Ginger Challenge”

This site uses Akismet to reduce spam. Learn how your comment data is processed. 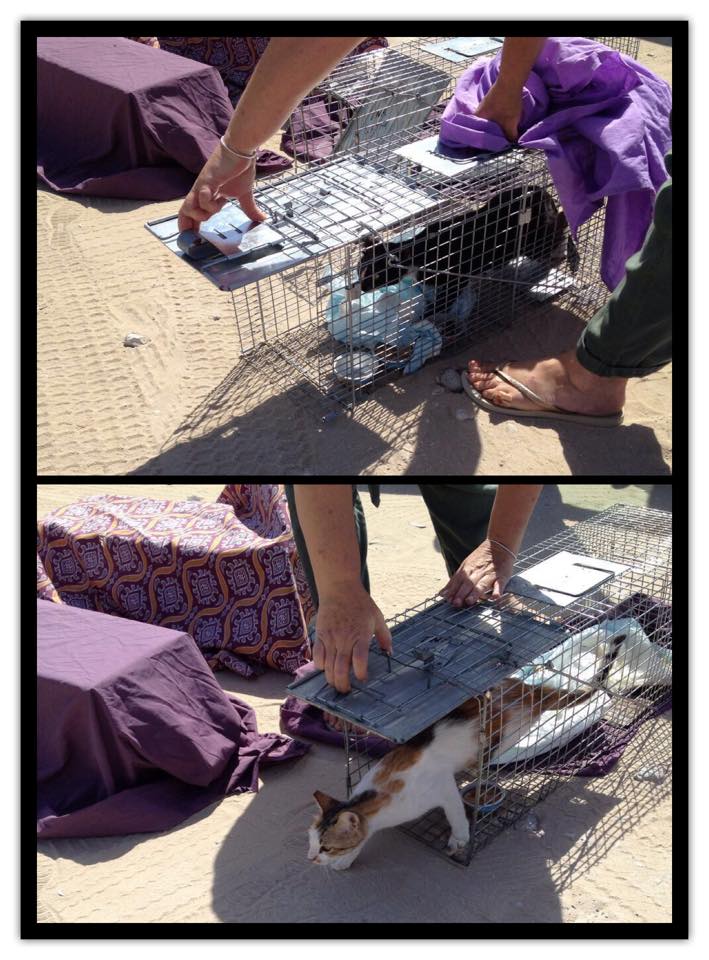 A dedicated group of volunteers working to improve the lives of the street cats in Qatar.